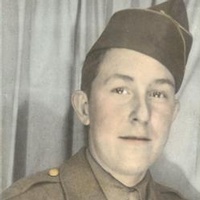 Funeral service for Wayne Dee Gowin is scheduled for Friday, June 19, 2015, 2:00 PM at the Wilson-Orwosky Funeral Home Chapel in Emory. Visitation will be Thursday evening, June 18, 2015 6:00-8:00 PM. Interment will be at the Dunbar Cemetery. Bro. Mike Frazier will officiate the service.

Wayne Dee Gowin, age 89, passed away Monday, June 15, 2015, at his home. He was born on September 14, 1925, in Dunbar, to Rance Garfield and Carrie Belle Giles Gowin. At age 18, he joined the
U. S. Army, and fought in the South Pacific during WWII. He
married Norma Lee Kennemer on May 15, 1948...they had 3
children...and were married for 53 years. His daughters say that you couldn't ask for a better father, and that he was always
supportive of everything they did. He loved the Lord and tried to live by the Golden Rule. W.D. worked many years and was
supervisor over the Flight Line at Ling-Temco-Vought. In 1988, he retired after 19 years of service as Sergeant of the Mineola Police Department. On January 4, 2003, he married Marie Rodgers, in Emory. They enjoyed doing many things together like going to
Canton Trade Days, watching the western channel on TV, and
raising registered Border Collies and Beagles. Marie said that W.D. was a "VERY special person, one of a kind", and she loved him very much. Wayne was an animal lover, and he especially loved his Beagles and miniature horses. He liked to cut up and was a
practical joker. He liked to go to the sale barn on Saturdays, but his favorite thing to do was sit on his back porch, smoke his little
cigars, watching all of his animals and enjoying God's beauty. He treasured time spent with his children and grandchildren.

To order memorial trees or send flowers to the family in memory of Wayne Gowin, please visit our flower store.