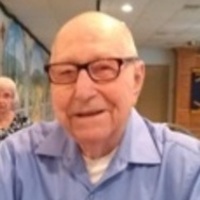 Deacon Walter Freund, age 91, life-long resident of McHenry, Illinois, passed away at his son's and daughter’s-in-law home in Emory, Texas, on Wednesday, April 15, 2020.

He was born on January 15, 1929, in McHenry, Illinois to the parentage of Walter John and Olive Gertrude Freund. He married Catherine Marie Wagner in Volo, Illinois in August 1949. His lifetime work was home construction and remodeling. Walter was ordinated a Deacon in 1978, where he served in numerous parishes in the Rockford Diocese. He was an Honorary Life member of Knights of Columbus and a life member of the Forresters.

Due to the corona virus quarantine, the interment and Mass of Resurrection will be delayed until August and will be held in Illinois.

Wilson-Orwosky Funeral Home of Emory is in charge of these arrangements.

Online guestbook may be signed for the family at www.wilsonorwoskyfuneralhome.com.

To order memorial trees or send flowers to the family in memory of Walter Freund, please visit our flower store.