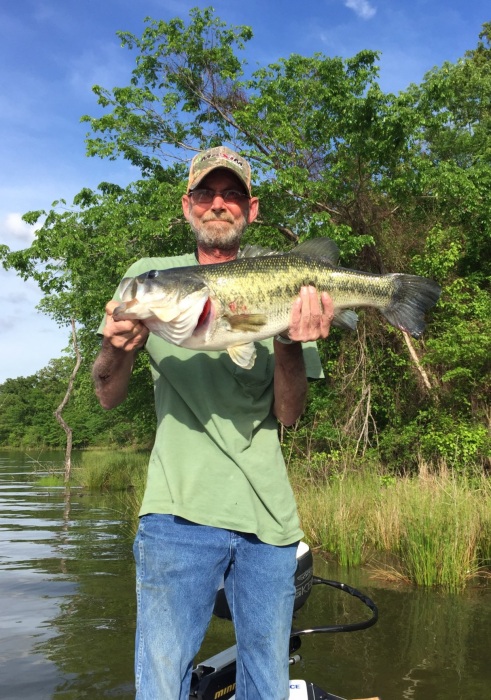 Teach a man to fish, and feed him for a lifetime, teach a child to fish, and teach them how to live a life of patience, pursuit and perseverance.  Steven Paul Thacker, born July, 10th, 1959 in Denison, TX left his sons, Cody Thacker with wife Gail Thacker of Lake Jackson and David Batts and his wife Diana Batts of Conroe in body, but his teachings will live through them, and his grandchildren Nikolai Jones, Ian Batts, William Thacker and Maxim Batts for generations.  Each of his boys are a reflection of his love for hard work and the outdoors, whether it be at the office, at the gym, in the boat or on the golf course.

While a man of few words, his love was shown through actions.  He leaves behind a wife, Kathy Vasser Thacker whom he wed on March 16th, 1985 in Angleton Texas.  Steve devoted his life to Kathy and their two boys.  His incredible work ethic while employed at Dow Chemical as a senior technician, was a testament of that love, always wanting to provide in abundance, despite the personal sacrifice, and never allow his family to want as he had as a young boy growing up.  Together, Steve and Kathy worked diligently to provide a loving home for their family, and he leaves behind that legacy.  Steve also leaves behind a brother, Mark Thacker.  Steve and Mark were more than just brothers, they were best friends, confidants, a dynamic duo.  Best friends from childhood, no problem was ever too big to solve nor was any fish safe when those two were together.  Their relationship was a shining example of brotherly love.  He also leaves behind brother Trampas Welch and sister Lucy Thacker Martin.

Steve also leaves behind a loving mother and mother in-law.  Steve’s mother, Margaret Devereux Welch with husband Joe Welch of Richwood and Winona Bailey Vasser of Danbury, were the two doting mothers that Steve loved dearly. Both knew exactly who to call when anything went wrong.  A self proclaimed jack of all trades, there was nothing the man couldn’t fix.  Equipped with a high school diploma I assure you he never wanted, his knowledge of mechanical systems and how they worked weren’t second to even the most educated.

Steve is preceded in death by his sister, Mary-Ann Thacker Blackburn, by his father, Royce Thacker, and Father in Law, Billie Vasser.  The latter two of whom, we can assure you, has already shown Steve the best fishing spots in heaven.

For those of you who may be sad for the loss of Steven P. Thacker, don’t be.  In his life he accomplished what few could in two lives and leaves his finger prints behind on everyone he touched.  A memorial service will be held in December, but due to Covid restrictions it will be limited to family.

To order memorial trees or send flowers to the family in memory of Steven Thacker, please visit our flower store.