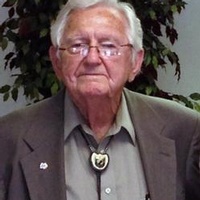 Funeral service for S.T. Hodges, age 93, of Emory, will be held 2:00 pm, Saturday, September 9, 2017, at the Church of Christ in Emory. Luis Camacho and Paul Foley will officiate. Interment will follow in Lake Fork Memorial Cemetery.

Mr. Hodges will lie in state at Wilson-Orwosky Funeral Home on Thursday until 4 PM, and also on Friday from 10 AM - 1:30 PM.

Mr. S. T. Hodges was born in Roby, TX, February 2, 1924, to Benjamin Parker and Sophronia Elsie Walker Hodges.
He served his country bravely during WWII. Captured at the Battle of the Bulge, along with 1800 other U.S. soldiers, he often shared stories of his time as a POW in and around Dresden, Germany.
Mr. Hodges married Dicksie Juanita Henson in Seminole on July 8, 1945.
They have been married 72 years.
S.T. and Dicksie lived and raised their children in Seminole, until S.T. retired from Exxon Oil. In 1982 they moved to Lake Fork and became long time members of Emory Church of Christ.
During his lifetime, he tried his hand at many different avocations, including raising quail, repairing radios, and making jewelry.
He spent countless hours in support of missions around the world.
He was always willing to share his opinion and words of wisdom.
S.T. was filled with boundless energy and an unparalleled work ethic.
His slow, wide grin and loving soul will be missed by all.

Numerous other loving family and friends;

Preceded in death by: Parents, and 2 Brothers, and 3 Sisters

To order memorial trees or send flowers to the family in memory of S.T. Hodges, please visit our flower store.