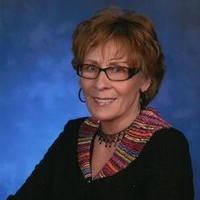 Shelia Yvette Moore, 72, went home to be with her Lord and Savior, Jesus Christ on Jan. 13, 2015 after a two year battle with lung cancer. She was at her new home in Point, TX, surrounded by family, with her beloved dog, Willie Nelson, closely by her side.

She was born to Robert and Martha (Nass) McDaniel on December 10th 1942 in Tacoma, WA. She was raised in Graham, WA and attended Bethel High School.

For more than 20 years she resided in Clovis, NM. In 1994 she completed her GED and began taking classes at the Junior College. In 2000 she began working for Marion “Ty” Rutter at Aldridge, Actkinson, & Rutter, LLC. What started as a humble temporary position turned into a whole new life for her; a life full of endearing friendships and career challenges. On October 4, 2005 she completed her education and earned a certificate from the paralegal program of Eastern New Mexico University.

She was an active member of Central Baptist Church and her Sunday school class in Clovis, NM. In her spare time she mentored school age kids with Whiz Kids; did fundraising events for the Make a Wish Foundation; helped out at the Matthew 25 charity; and loved to go dancing at the Eagles Club.

Preceded by: parents; and 2 brothers: Steve McDaniel and Mike McDaniel

Memorial services will be held in Clovis, NM with her church family and friends at Central Baptist Church on Saturday, January 24, 2015 at 11am, followed by a memorial service to scatter her ashes near her birthplace at the base of Mt. Rainier in Graham, WA, on Mother’s Day weekend 2015.

In lieu of flowers the family request that donations be made to the American Lung Association at 1-800-LUNGUSA or any of the aforementioned charities of your choice.

Cremation arrangements are under the direction of Wilson-Orwosky Funeral Home of Emory, TX.

To order memorial trees or send flowers to the family in memory of Shelia Moore, please visit our flower store.