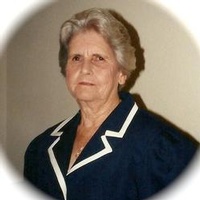 Funeral service for Sally Ann Dittman, age 96, of Emory, will be held on Tuesday, August 26, 2014, at 10:00 am, at Wilson-Orwosky Funeral Home Chapel. Bro. Billy Smith and Bro. Jerry Jackson will officiate.
There will be a private burial in Slatter Cemetery afterward.
Visitation will be Monday evening, 6:00 until 8:00 pm at the funeral home.

Mrs. Dittman died in the early evening on Friday, August 22, 2014.
She was born on March 8, 1918, in Mississippi to Lonzo Jackson and Willie Lee Reynold Ray. On Nov. 9, 1934, she married James Monroe "Ned" Dittman, in Mississippi. They settled in Emory to raise a family. She was a long time resident of Emory, working as a field hand for several different farmers in Rains County. She worked very hard to raise her family of six children.

Survivors include:
3 Daughters: Earnestine "Tina" Florez, and Fannie Hill, and husband, James, both of Emory; and Joyce Smith, and husband, Tommy, of Grand Prairie

To order memorial trees or send flowers to the family in memory of Sally Dittman, please visit our flower store.