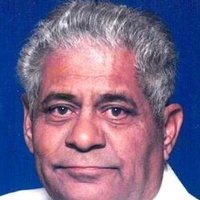 Robert Garcia Martinez, 76, of Point, passed away Monday May 1, 2017, at his home.
He was born in Alice, on January 19, 1941, to Rufino Villarreal and Elvira Garcia Martinez.
He worked all his life as an independent, self-employed worker in the masonry field.

He married Audelia Longoria, in Alice, on March 17, 1958. They were married some 54 years...Robert was so proud of that and mentioned it often. Together throughout the years...they provided a jail ministry in Hunt County and Rains County as well. While dealing with men in the jail, the then sheriff, Sheriff Young, had such confidence in the Martinez family...he let them take some of the prisoners that had professed the Lord, to their church to baptize them.
Robert and Audelia raised five little boys...
now, those little boys are all grown Christian men and ministers in their own right.

To order memorial trees or send flowers to the family in memory of Robert Martinez, please visit our flower store.