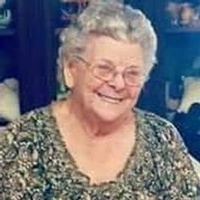 Ozella Mae Young, age 88, of Garland, formerly of West Tawakoni, passed away, Saturday, June 20, 2015, at the Senior Care Beltline in Garland, TX. Ozella was born on August 9, 1926, in Row, OK, to Jesse Horton and Blanche Mae Ellis Allen. She married William J. Young, in Rockwall, in December 1966. She worked for many years in food service at the Cafeteria at E-Systems in Garland. She was a long time member of Church of Christ of Emory.

Funeral service is scheduled for 1:00 PM, Wednesday, June 24, 2015, at the Wilson-Orwosky Funeral Home Chapel in Emory. Visitation is 1 hour prior to the funeral service at 12:00 Noon. Interment will be in Dougherty Cemetery.

To order memorial trees or send flowers to the family in memory of Ozella Young, please visit our flower store.