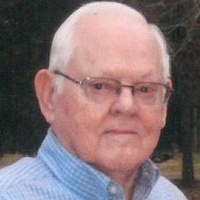 Neil Alex Harris, age 92, of Point, Texas, passed away unexpectedly, yet very peacefully in his sleep at his home Sunday morning. Mr. Harris was born February 24, 1926, in Point to the parentage of Marshall Ernest and Lucy May Smith Harris. He and Mary Lou Turner were married on October 30, 1948 at Emory. He retired from Braniff Airlines as head of Tax and Payroll. He was a member of the Point Methodist. Mr. Harris was proud of the many accomplishments he achieved during his life. Those include being a Master Mason, Shriner, Scottish Rite, Knights Templar, and Navy Navigator on a torpedo bomber assigned to the USS Saratoga during World War II. He will be greatly missed by all who knew and loved him.
Survivors include: Wife, Mary Lou Harris of Point; daughter, Jeanie Lou Burgin of Dallas; sons, Robert Neil Harris (Bobbie) of Emory, and Stephen Lee Harris (Angie) of Plano; grandchildren, Jennifer Burgin; Paige Acevedo; Natalie Abadie; Neil Harris; Lindsey Gaddis; Ginger Harris, great-grandchildren, Evan; Lacy; Vivian; Emma and Juliet. Numerous other loving nieces, nephews and friends. He was preceded in death by: Parents; brothers, Marshal Harris; Bill Ed Harris; Melbourne Harris; James Harris, sisters, Vashti Wiggs; Anna Sonnier; Rose Nagel; Bobbie Barger and Virginia Dooley. Memorials may be made to the Good Samaritans, Emory, Texas75440.

Interment will follow service in Lone Star Cemetery in Point.

Interment will follow service in Lone Star Cemetery in Point.

To order memorial trees or send flowers to the family in memory of Neil Harris, please visit our flower store.