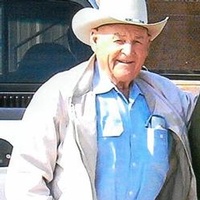 Marion Emil "M.E." or "Jelly" Edgar, age 93, of Emory, passed away Sunday, April 9, 2017, at Texoma Medical Center in Denison. Funeral service is scheduled for Friday, April 14, 2017, at Emory Church of Christ, 1:00 PM, with Louis Comacho officiating. Interment will follow in the Dougherty Cemetery.

Mr. Edgar was born on June 14, 1923, in Madill, OK, to Dennis Garnie and Grace Lorene Harris Edgar. He proudly served our country during WWII in North Africa, Sicily, and Italy in the United States Army, 91st Infantry Division. Later he married Margaret Charlene Buie in Rockwall on December 15, 1946. Together for some 60 years, they raised a wonderful family. Mr. Edgar was owner and operator of Ross and Greenville Automotive in Dallas for 50 plus years before retiring. He was a member of Emory Church of Christ.

To order memorial trees or send flowers to the family in memory of Marion Edgar, please visit our flower store.