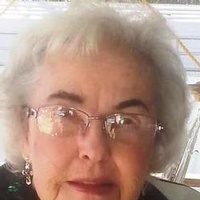 Joyce Vernice "Memaw" Martin, age 81, of Emory, formerly of Wills Point, passed away Wednesday evening at her home. Funeral service is scheduled for 2:00 PM, Saturday, October 8, 2016, at Wilson-Orwosky Funeral Home Chapel in Emory, with Bro. Perry Crisp officiating. Burial will follow in the Lake Fork Memorial Cemetery in Alba. Visitation is scheduled 1 hour prior to the service at 1:00 PM, on Saturday, October 8, 2016 at the Wilson-Orwosky Funeral Home Chapel.

Vernice was born on July 19, 1935, in Princeton, to Elbert Jasper and Bonnie Mitchell Wright. Later she married Alvin Cave on January 16, 1952. To this union was born 8 wonderful children. Vernice, or "Memaw" worked for many years managing apartment complexes, but the most important job in her life was being a loving wife, mother and grandmother.

visitation 1 hour prior at 1 PM

visitation 1 hour prior at 1 PM

To order memorial trees or send flowers to the family in memory of Joyce Martin, please visit our flower store.