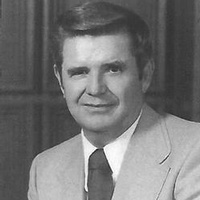 Funeral service for retired pastor, Bro. Johnnie Ray Turner, age 94, of Point, are scheduled for Saturday, January 9, 2016, 2:00 PM, at Smyrna Church. Bro. Ron Dummer will officiate. Interment will follow in the Smyrna Cemetery. Visitation will be one hour prior to the service at 1:00 PM. Wilson-Orwosky Funeral Home of Emory is in charge of the arrangements.

Bro. Johnnie Turner passed away Tuesday, January 5, 2016, at his home in Point.

Bro. Turner was born in Emory on September 18, 1921 to Melvin Edgar and Amanda Frances Daniel Turner. He married Charlotte Ann Walker in Yantis on December 24, 1970. He worked many different jobs in his lifetime, and was a jack of all trades, but his most important job was being a minister and leading people to the Lord. He was a veteran who proudly served his country in the U.S. Army. He was a member of Seven Oaks Baptist Church.

To order memorial trees or send flowers to the family in memory of Johnnie Turner, please visit our flower store.