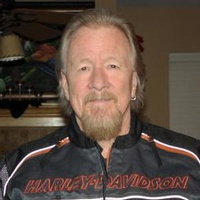 A memorial service will be held on Saturday, May 7, 2016, 2:00 pm, at
Wilson-Orwosky Funeral Home.
Tony died at Medical City Hospital, in Dallas, on Thursday, April 28, 2016.
Tony was born Dec. 26, 1944, in Dallas, to Lonnie and Bobbye Carroll Murray.
He was a truck driver for Yellow Freight for many years.
He served his country during the Vietnam era in the U.S. Army.
Later, Tony married Glenda Annette Wallace, Feb. 1, 1996, in Edgewood.
He was a member of "The Greater Vision Church" in Emory.
Tony played lead guitar with and for "The Wallace Family"...of which he was a "personal member" of that family as well.
He was a great guy... and, will be so missed by all who knew him.

To order memorial trees or send flowers to the family in memory of John Murray, please visit our flower store.