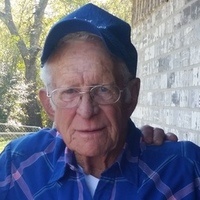 Funeral service is scheduled for 2:00 PM, Thursday, January 23, 2020 at Wilson-Orwosky Funeral Home Chapel in Emory. Interment will follow in Dougherty Cemetery. Bro. David Hamm and Stephen Sparks will officiate. Visitation will be 1 hour prior to the service from 1:00-2:00 PM.

Jim was born in Sulphur Springs on June 11, 1937, to the parentage of John Henry and Agnes Lee Taylor. He grew up in the Seymore area, his father was a peanut farmer and also a milk by hand dairy farmer. His father counted on him to be a big part of the labor on these farms. He later joined the United States Air Force where he proudly served our country, and fought in the Korean War. He married Uleta Mae Sparks in Seymore on August 26, 1966, and they were married 53 years. He was a hard working man. He worked self-employed as a welder and throughout the years he worked for several different companies. Jim was a Christian.

To order memorial trees or send flowers to the family in memory of James Taylor, please visit our flower store.