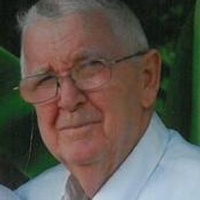 Ivan Wayne Mitchell, age 77, of Emory passed away Monday, May 6, 2013 in Sulphur Springs.
Funeral service for Ivan Mitchell will be held 2:00 pm, Friday, May 10, 2013, at the House of Prayer Church in Emory.
Interment will follow in Greenview Cemetery. Bro. Kenneth Ishmael and Bro. James Mitchelll will officiate.
Visitation is 6-8:00 pm, Thursday, May 9, 2013 at Wilson-Orwosky Funeral Home Chapel. Mr. Mitchell was born in Emory, April 13, 1936, to S.P. and Lucinda York Mitchell
Ivan married Peggy Beavers in Clovis, New Mexico on Oct. 27, 1956.
He was a member of the House of Prayer Church.
He worked as an electrican and was a member of the IBEW #59 for 55 years.

To order memorial trees or send flowers to the family in memory of Ivan Mitchell, please visit our flower store.