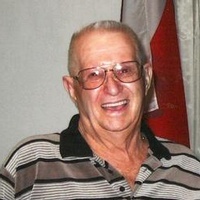 Buddy was born on November 20, 1930 in Rockdale, TX to Homer Thomas and Clara Mae Rice Dymke. He later married Betty Jane Williams in Galveston on July 23, 1949. He was an oilfield worker and retired after many years of hard work at several different oil companies.

He is preceded in death by his parents.

Cremation arrangements are under the direction of Wilson-Orwosky Funeral Home. Services to be announced by the family at a later date.....See Below:

A shared memorial service for Mrs. Dymke, and her husband, Homer "Buddy" Dymke, who passed away on July 17, 2014, (only 6 days prior to their 65th wedding anniversary) is scheduled for Saturday, August 16, at 4:00 PM at the House of Prayer Church in Emory, Pastor Scott Townley officiating. Both cremation arrangements and the memorial service for Mr. and Mrs. Dymke will be under the direction of Wilson-Orwosky Funeral Home of Emory. Online guestbook may be signed at www.wilsonorwoskyfuneralhome.com. In lieu of flowers the family strongly requests that donations be made to the House of Prayer Church, 1380 Hwy 515 East, Emory, TX 75440.

Please sign the online guestbook for the family here.

To order memorial trees or send flowers to the family in memory of Homer Dymke, please visit our flower store.