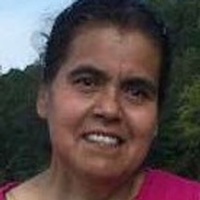 Funeral mass for Falvia Rodriguez-Juarez age 54, of Emory, will be held on Wednesday, October 31, 2018, at
St. John the Evangelist Catholic Church in Emory. Father Victor will officiate. Burial will follow the service in Emory City Cemetery.
A visitation will be held on Tuesday evening, 6:00 - 8:00 pm at Wilson-Orwosky Funeral Home Chapel.
Flavia passed away in her home, on Thursday afternoon with her family all around her.
She was born May 12, 1964, in Tanque de San Juan, Rio Verde, SLP, to the parentage of Emiliano Rodriguez and Angela Juarez.
Flavia married Antonino Silva in Atotonilco, SLP, on October 8, 1981.
She was attended St. John the Evangelist Catholic Church.
Flavia's husband and children left here to cherish her memories include:
Husband: Antonino Silva of Emory
Sons: Joel Silva and Marcelo Silva, both of Emory
Daughters: Evelia Lopez of Yantis
Alicia Silva and Graciela Silva both of Emory
Parents: Emiliano and Angela Rodriguez- Juarez
Brothers: Martin Rodriguez and Zenon Rodriguez, both of Victoria
Anacleto Rodriguez of SLP
Jacinto Rodriguez and Juan Rodriguez, both of Point
Sisters: Antonia Comacho of Emory
Maria Alvarez of Point, and,
Victoria de Mendoza of Laredo, Mexico

Flavia was preceded in death by:
2 Sisters: Ermelinda Rodriguez and Maria Ines Rodriguez

To order memorial trees or send flowers to the family in memory of Flavia Rodriguez-Juarez, please visit our flower store.