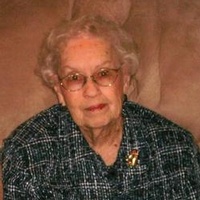 Elizabeth "Sis" Marie Williams, age 101, of Emory, passed away Saturday, October 29, 2016, at Senior Suite Care and Rehab in Emory. Funeral service is scheduled for 11:00 AM Wednesday, November 2, 2016, at Wilson-Orwosky Funeral Home Chapel, with visitation being 1 hour prior at 10:00 AM. Kyle Beard and Mike Willis will officiate. Interment will follow the service in Turner Cemetery.

Mrs. Williams was born on December 22, 1914, in Emory, to Russell Martin and Mattie Ann Hutchins Armstrong. She married Earl Joseph Williams in Emory on September 23, 1950. She went by the nickname "Sis" for most of her life. Sis lived in Dallas and worked at Skillern's Drug Store as a young adult and later moved back to Emory and owned a Five & Dime Store on the square with her sister Mozelle. Later, Sis and Earl lived and worked in West and Southwest Texas for many years before returning to Emory to retire.

"Sis" was a long time member of Emory Church of Christ.

Although she was never able to have children of her own, she was a dear aunt to all the children in the family and was also considered a second mother and grandmother.

Sis was a 30 year cancer survivor, being diagnosed with breast cancer in 1987. She lived at her own home, independently, until the age of 101...just recently moving to Senior Suite Care and Rehab in Emory.

Survivors include:
Nephews: Charles Armstrong of Maude and Mike Willis of Emory;
Nieces: Judy Davis of Emory and Ann Porterfield of Oklahoma City, OK;
Numerous other loving family and friends;

To order memorial trees or send flowers to the family in memory of Elizabeth Williams, please visit our flower store.