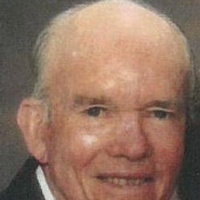 Funeral service for Mr. Edward Denton Hutchins, age 96, of Emory, will be held on Sunday afternoon, May 8, 2016, 2:00 pm, at Emory Church of Christ. Jerome Savage and Paul Foley will officiate. Burial will follow in Colony Cemetery. Visitation will be on Saturday evening 6:00 to 8:00 pm, May 7, at Wilson-Orwosky Funeral Home Chapel.
Mr. Hutchins passed away Tuesday evening, May 3, 2016, at Senior Suite Care and Rehab.
He was born April 18, 1920, in Runnels County to Edward Zacharia and Sadie Idelia Hall Hutchins.
He married Ida Elizabeth Hickman, in Houston, on June 14, 1941.
After marriage, he served his country between 1942 and 1945 in the
U.S. Army Air Corp, where he was stationed in San Marcos as an airplane mechanic.
To this marriage of almost 75 years, Edward and Elizabeth brought into
this world 2 children...they survive.
At one time, Mr. Hutchins was the oldest Veteran in Rains County..holding that position for some period of time, 8 to 10 years.
He was a member of Emory Church of Christ.
Survivors left to morn his passing are:
Wife: Elizabeth Hutchins of Emory;
Son: Michael Hutchins, and wife, Sandra of Mesquite;
Daughter: Linda Junker, and husband, Harry of Meridian;
Granddaughter: Joy Wingo, husband, Nathan;
Grandson: Brian Hutchins, and wife, Yaqun;
Great-grandsons: Matthew and Benjamin Wingo;
Great-granddaughter: Elizabeth Lin Hutchins;
Sister: Ola Morgan;
Brothers: Mack Hutchins and Johnnie Hutchins;
Many extended family members and faithful friends;
Precede in death by: Parents; and Sisters: Trixie McKenzie, Ara Brown, Bonnie Eads, and Mable Eads

To order memorial trees or send flowers to the family in memory of Edward Hutchins, please visit our flower store.