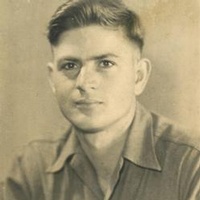 Clyde Ray Wright, age 92, of Tyler, formerly of Emory, passed away on Friday, July 17, 2015, at Colonial Tyler Care Center. Military funeral service is scheduled for Wednesday, July 22, 2015, 11:00 AM, at the Wilson-Orwosky Funeral Home of Emory. Interment will follow in the Smyrna Cemetery in Emory. Visitation will be held one hour prior to the service at 10:00 AM. Glenn Cogburn will officiate.

Clyde was born on September 27, 1922, in Dallas, to Willie Jasper and Cornelia Floyd Wright. He married Opal Beatrice Fleming in Emory, on February 14, 1941. He proudly served his country as a soldier in the United States Army, during World War II, fighting in 7 different countries during his service in the military. After the Army, he worked as an aircraft mechanic with LTV, Inc. for many years.

Host of other loving family and friends

Please sign the guestbook at the link above for the family.

To order memorial trees or send flowers to the family in memory of Clyde Wright, please visit our flower store.