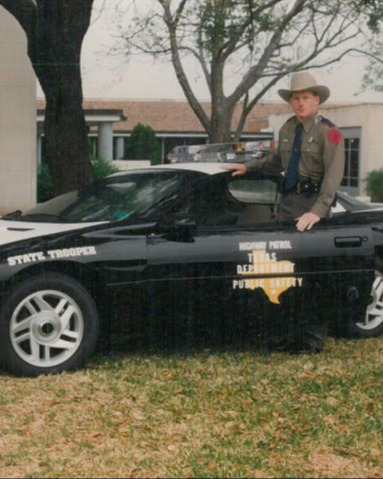 Brian was a loving father, son, brother, friend, and uncle.  Brian's family and his pets were his life.  His children were his world.   Brian loved Jesus, was a man of great faith, and was dearly loved by many.  He was the sweetest most caring person that you could ever know.  His smile was wonderful even during tough times.  He never shook a task.  He would always work with what was given even if it wasn't much.  He had a knack for taking things apart even if they were working.

Brian graduated from Rains High School in 1987 where he was a star basketball, baseball, track, and football player.  He once had 28 tackles in a game against state ranked Crandall.  He received several all district honors.  At Rains he was voted most courteous, best personality and the most prestigious award of having the prettiest legs in a school contest.  Brian then graduated from Kilgore College Police Academy in 1991.  He began his law enforcement career at the Mount Pleasant Police Department where he received multiple commendations from 1991-1995.  He once chased a suspect 3 blocks on foot before catching him.  He was commended as a Life Saver after saving an elderly citizen from choking. While in Mount Pleasant, Brian initiated the Selective Traffic Enforcement Program (STEP) aimed at catching drunk drivers, and was instrumental in the Juvenile Gang Intervention Task Unit. Brian was then selected to attend the State Trooper Training school in 1995.  After graduating Trooper school he was first stationed in Cooper, Texas and then Sulphur Springs, Texas. He was awarded the District Commanders Award for drug interdiction. Brian was a State Trooper from 1996-2009 until he had to retire due to a disability related to work.  While a trooper Brian received many awards including the prestigious Texas Department of Public Safety Chief's Award for his dedication that resulted in the arrests of numerous criminals and seizures of large amounts of illegal drugs. He was named Trooper of the Year in 1998.  He was commended by the FBI for his assistance in the apprehension of counterfeit currency.  While a trooper he was also a part of the Red River Valley Task Force.  Brian had too many accomplishments to all be listed in an obituary because it would take the whole newspaper.

In Lieu of flowers, consider making a donation to the children.  Brian Worley Love Account is available at Austin Bank in Emory.

To order memorial trees or send flowers to the family in memory of Brian Clint Worley, please visit our flower store.