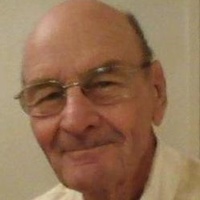 Graveside service for Bobby Dean Crump, 84, of Emory, will be held on
Thursday, July 21, 2016, 12:00 noon, at Mt. Olive Cemetery in Timpson.
Mr. Crump passed away at his home on Sunday, July 17, 2016.
He was born in Timpson on Oct. 25, 1931, to Pallas Oscar and Virgie Holland Crump.
He served his country in the U.S. Navy, and was ranked as E-3 AN.
He was in the Naval Parachute Unit, stationed NAAS, El Centro, CA.
He married Elizabeth Ann Miller in Emory on July 31, 2011.
Survivors include:
Wife: Ann Crump of Emory;
Niece: Melessia Haggerton;
Nephews: Dwayne Brister and Scott Brister;
Step-daughter: JoAnn Steel Robbins (Malcolm) of Emory;
Step-Sons: Thomas Earl Miller, Jr. (Connie) of Caddo Mills and,
Matt Miller (Sandra) of Emory;
Step-grandchildren: 13;
Step-great-grandchildren: 30;
Numerous other loving family and friends;
He was preceded in death by his parents and sister, Patsy Brister

To order memorial trees or send flowers to the family in memory of Bobby Crump, please visit our flower store.