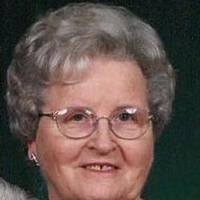 Funeral service for Beuna Irene Carter, age 90, of Garland, formerly of Emory, will be held 11:00 AM, Wednesday, Sept. 2, 2015, at Wilson-Orwosky Funeral Home Chapel in Emory. Visitation will be one hour prior to service time, at 10:00 am, at the funeral home chapel. Ministers to officiate will be Wayne Darty, Charles Carter, and Ryan Ivy. Interment will follow at Clifton Cemetery in Emory.
Mrs. Carter died, in Garland, on Sunday, Aug. 30, 2015.
She was born Feb. 19, 1925, in the Emory area, to Charlie and Vena Lee McVay. She married Cleburn Ray Carter on September 5, 1946 in Emory, and they were married some 65 years. She was a homemaker
...her priority in life was taking care of her husband and family.

Mrs. Carter was a member of County Line Baptist Church.
Famous for her fried chicken, dressing, chocolate pies, and many other dishes she raised her family on.

To order memorial trees or send flowers to the family in memory of Beuna Carter, please visit our flower store.