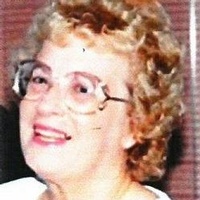 A combined memorial service will be held for Betty Jane Dymke, and her husband, Homer "Buddy" Dymke, who passed away July 17, 2014, only 6 days before their 65th wedding anniversary. The combined memorial service will be held at the House of Prayer Church in Emory on Saturday, August 16, 2014 at 4:00 PM, Pastor Scott Townley officiating. In lieu of flowers the family strongly wishes for donations to be made to the House of Prayer Church, 1380 Hwy 515 East, Emory, TX 75440.

Betty Jane Dymke was born in Galveston on December 2, 1931 to Oscar D. and Minnie Louise Brooks Williams. She married Homer Thomas "Buddy" Dymke in Galveston on July 23, 1949, and they were married almost 65 years.

In addition to being a loving house-wife, together with her husband, they owned and operated the B & B BBQ in Kermit, Tx.

To order memorial trees or send flowers to the family in memory of Betty Dymke, please visit our flower store.