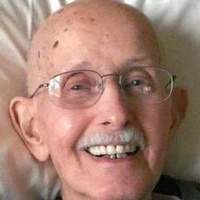 August Henry Metz, age 92, of Point, passed away Saturday, Jan. 7, 2017, at his home with his loving family gathered around him.
He was born Nov. 1, 1924 in Oak Harbor, Ohio, to Mr. and Mrs. August
H. Metz.
He married LaQuita Preskitt in Garland, on Dec. 10, 1974.
During his working career, he worked many years as a salesman for a plastics company. Later in life, he worked as general manager for
South Rains SUD for a number of years.
He served his country in the U.S. Army.
Also, he was a member of Mars Hill Masonic Lodge, Shriners, and, American Legion Post 156.
August never met a stranger. He was a very happy man who found joy, humor, and a fulfillment of life everyday.
Those left to reflect and cherish his memory are:
Wife: LaQuita Metz of Point
Sons: Tom O. Metz of Jacksonville, FL; and, Joseph Borowski of Atlanta, GA
Daughters: Mary Goodnight of Point; and, Melissa Cathcart of Point
Grandchildren: Heather, Katherine, Rachel, Caralyn, Jason, Apryl, Jack, August, Connor, and Liam
Great-grandchildren: Kiela, Caleb, Logan, Brandon, Christy, Hannah, and Robby
Faithful little companions: Buddy and Chloe
Numerous other loving family and friends
Preceded in death by: Parents, 2 daughters, Susan Metz and Ann Metz; 1 son, John Borowski; 1 brother, and 3 sisters
Cremation arrangements will be under the direction of Wilson-Orwosky
Funeral Home in Emory.

To order memorial trees or send flowers to the family in memory of August Metz, please visit our flower store.