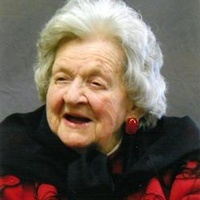 Ermagene Poston, age 97, of Mineola, formerly of Alba, passed away Sunday, July 5, 2015. Funeral service is scheduled for Wednesday, July 8, 2015, at 10:30 AM, at Pleasant Ridge Chapel. Rev. Pam Dountas will officiate. Interment will follow in the Pleasant Ridge Cemetery. Visitation will be Tuesday evening, 6:00-8:00 PM at the Wilson Bartley Funeral Home in Alba. Wilson-Orwosky Funeral Home of Emory is in charge of all funeral arrangements.

Adolphus Ermagene Poston was born on June 20, 1918, in Alba, to Alvis Otto and Essie Russom McKenzie. Ermagene married G.G. Poston in Alba, on May 30, 1936. She was homemaker, farmer, dairy farmer and she volunteered at Alba Golden grade school where her grandchildren attended. It was there she got the name "Grannie Gene" which everyone knew her by, and it was her favorite name to be called. She was a member of First United Methodist Church of Alba where she was very active and she taught Sunday School for many years.


Please sign the guestbook at the link above for the family.

To order memorial trees or send flowers to the family in memory of Adolphus Poston, please visit our flower store.